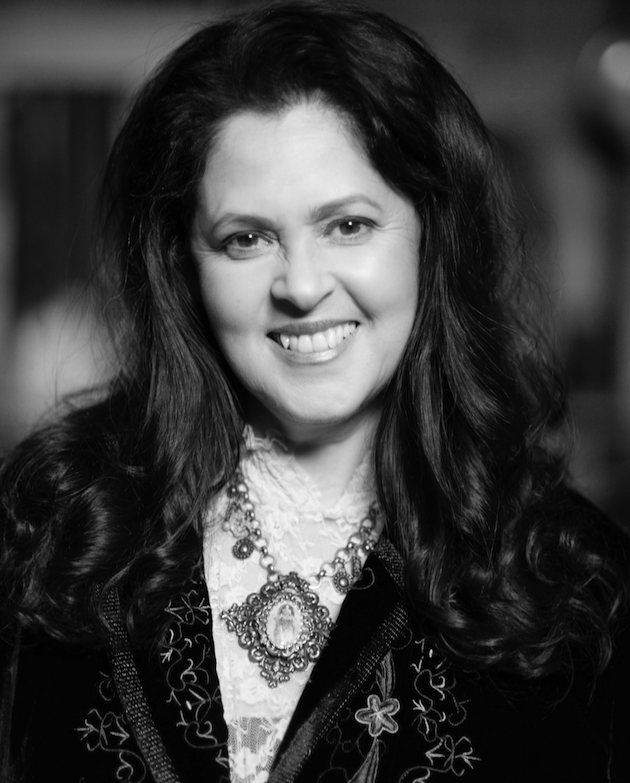 A meaningful career as a child to teenage concert cellist led to playing with the Miami Philarmonic by the age of 18 and the Detroit Civic Orchestra by 21, with a focus on performing chamber music by Latin American composers. 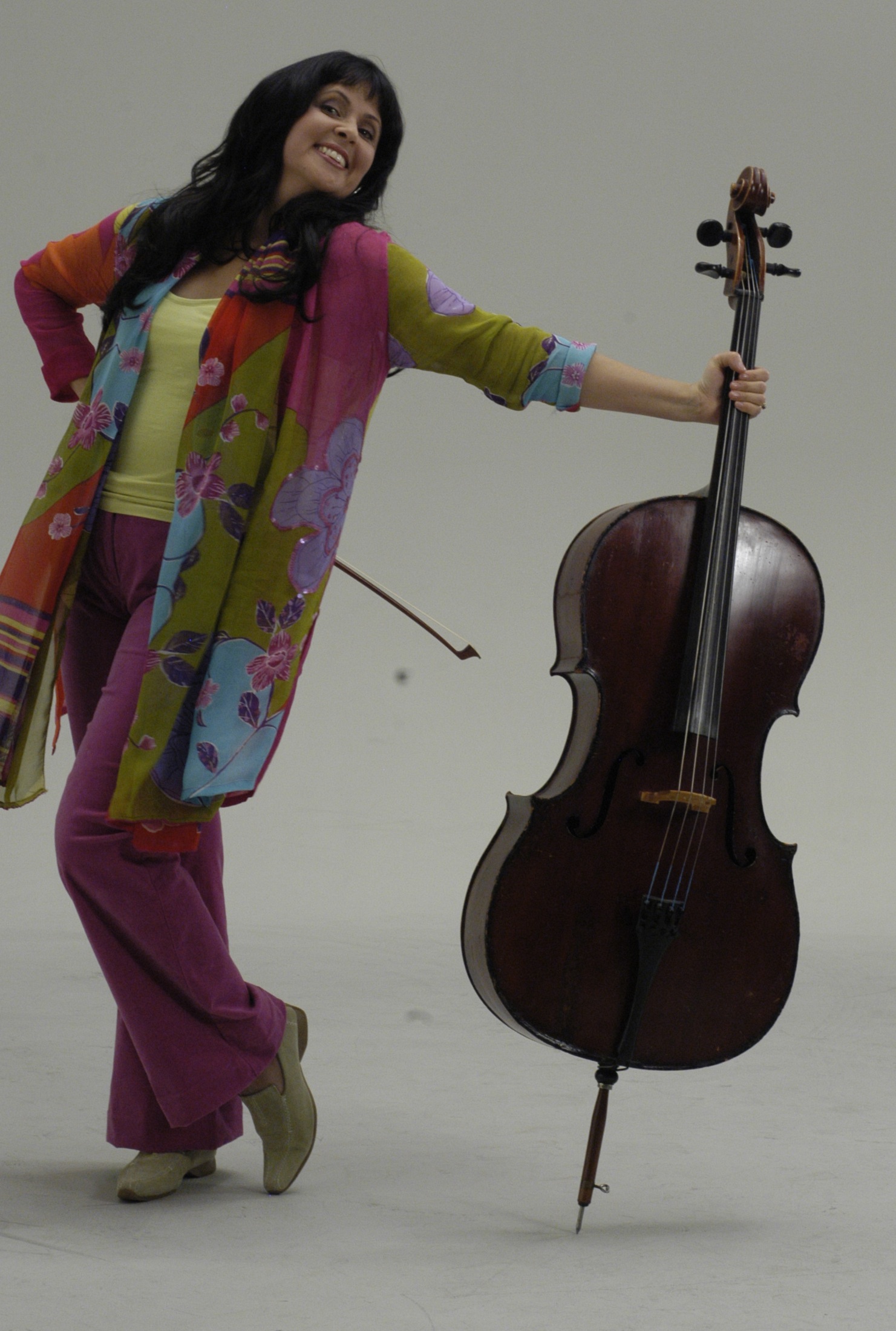 In Los Angeles, MDR became a top studio musician and SAG-AFTRA contractor. MDR soon became an artist-entrepreneur and began to produce advertising, albums, and publishing projects as a bilingual producer creating the Spanish versions of hundreds of National campaigns and advertising such as Coca-Cola Worldwide. 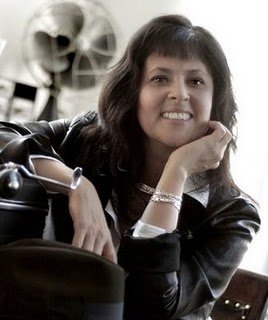 That experience led to producing and performing on Lullabies of Latin America that won a Latin Grammy-Award Nomination and Parent's Choice Gold Award as a bilingual recording artist. MDR was one of the first Hispanic woman producers to be nominated for a Latin Grammy in 2000. Shown here with life partner James Schaller CMP, composer. 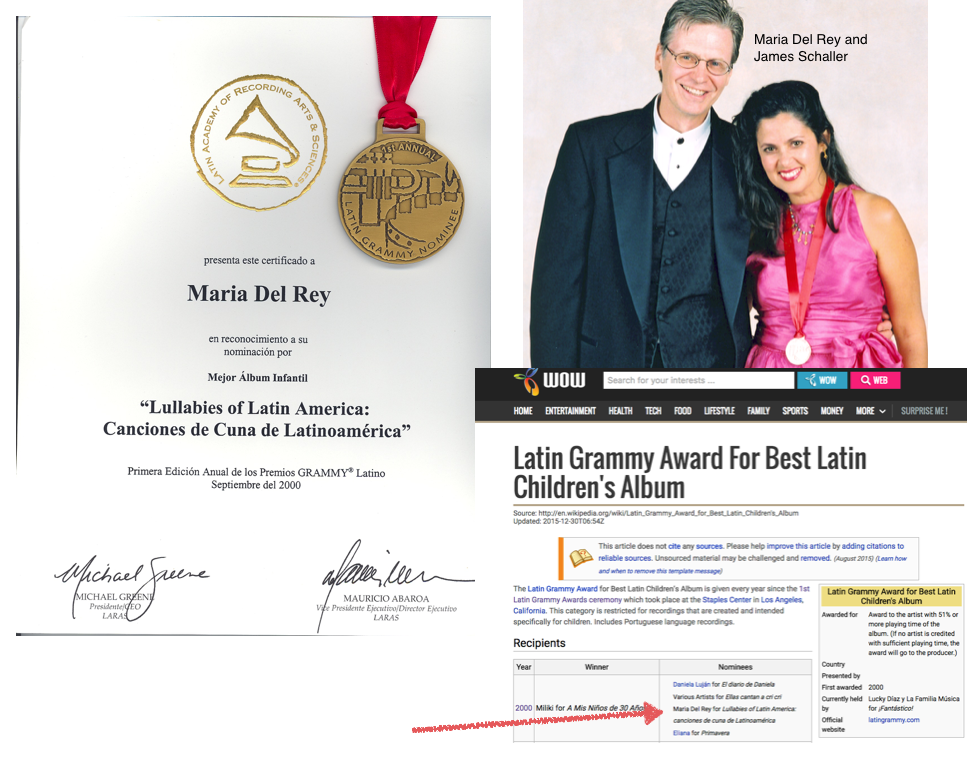 MDR took the show on the road and headlined over a decade of mostly sold out performing arts centers across the nation from 2000 to 2011. It was the first multimedia-concert where both migrant workers and elite wealthy families came together to celebrate the rich and empowered view of Latin America. Over 67,500 children from all walks of life participated in the Bridge: El Puente (BEP)multicultural programs that were created and self-funded by MDR and dozens of philanthropic investors across the nation. A multi-record deal with Warner, facilitated MDR to produce a line of original recordings for children during the 2000s during our eleven-year concert tour. 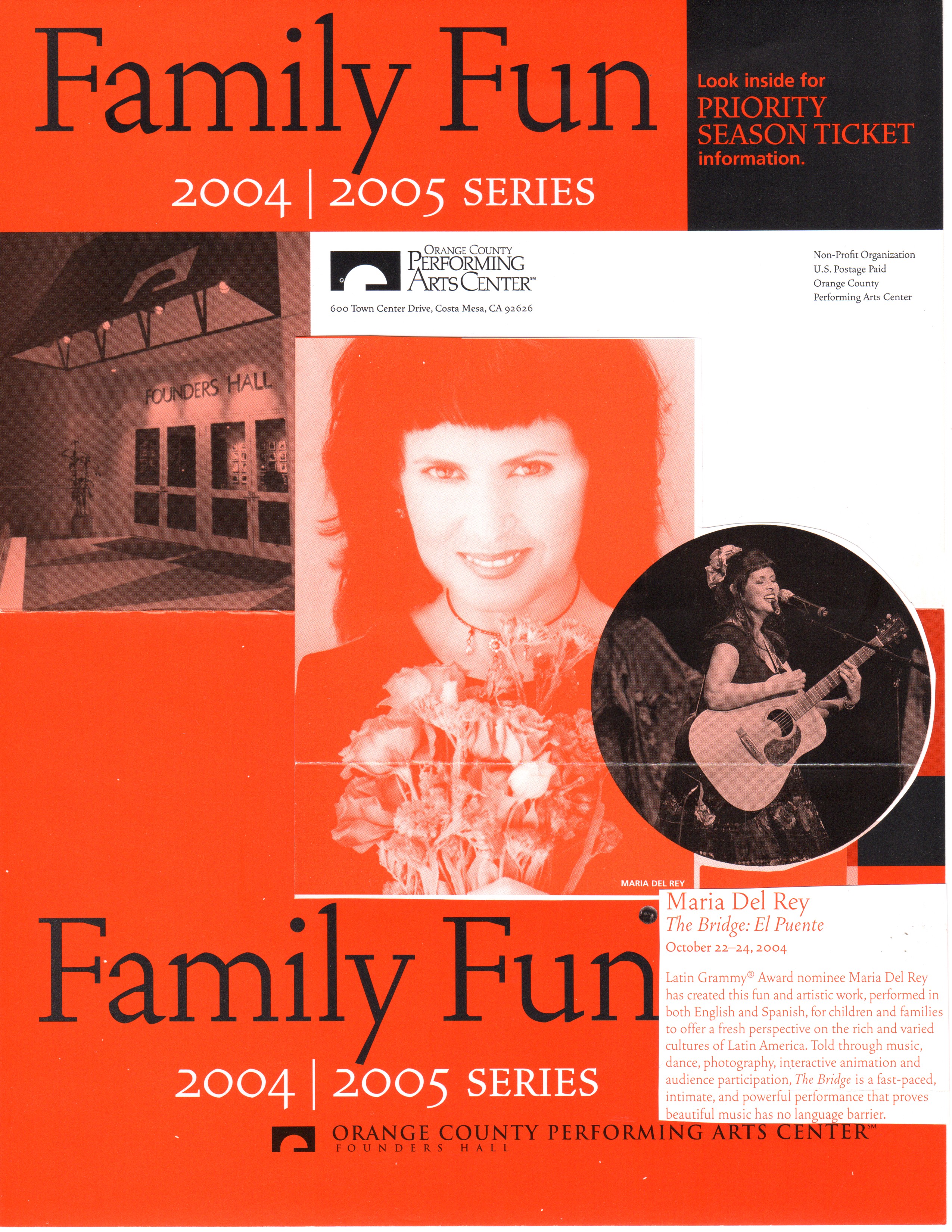 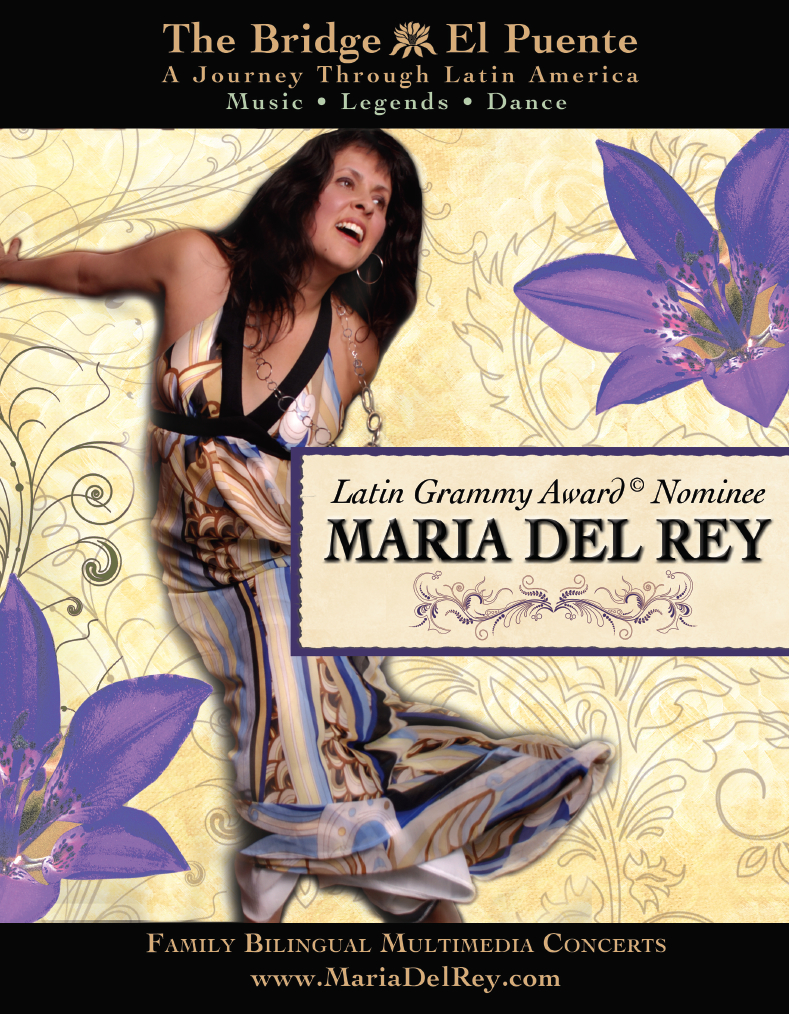 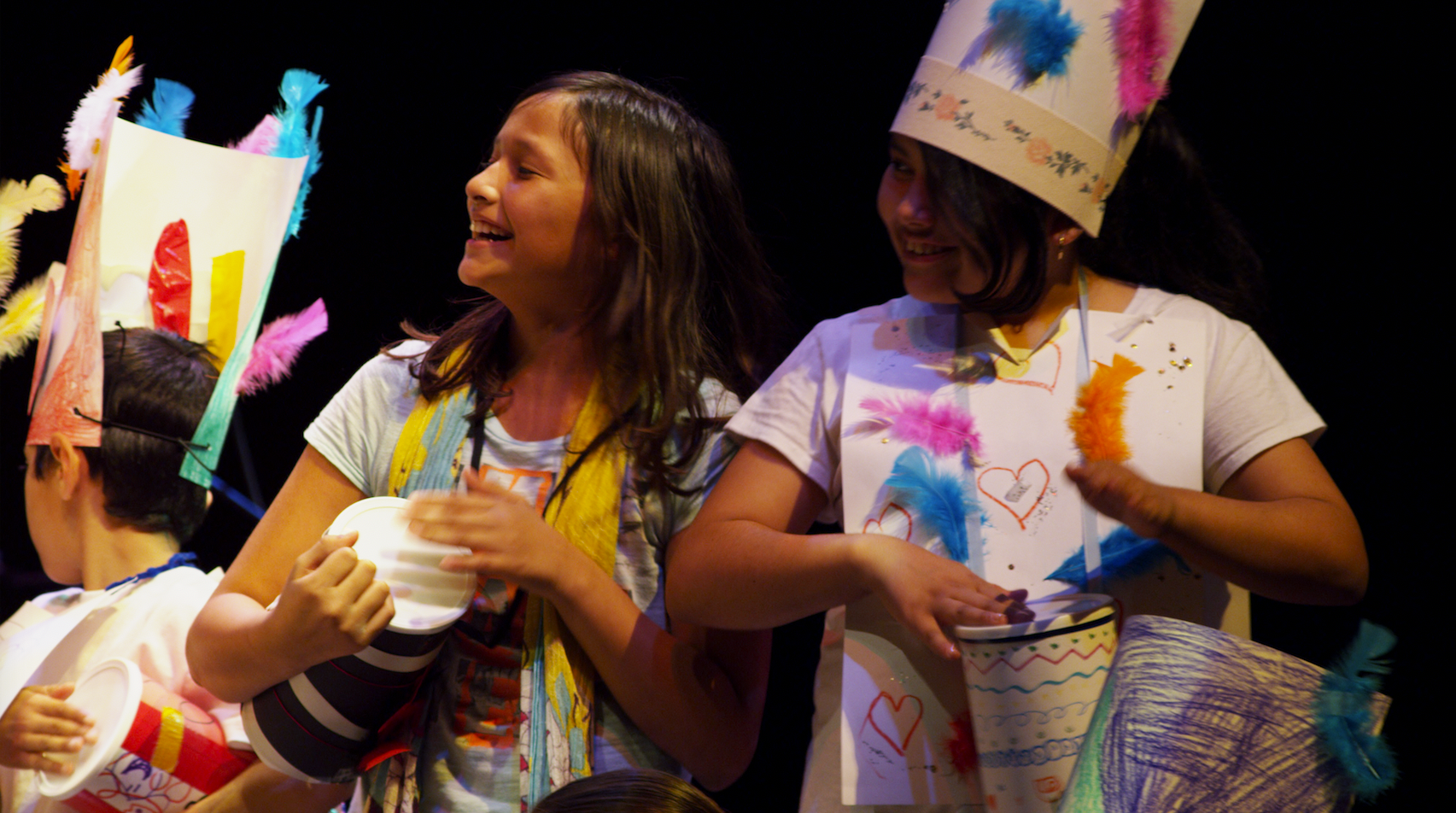 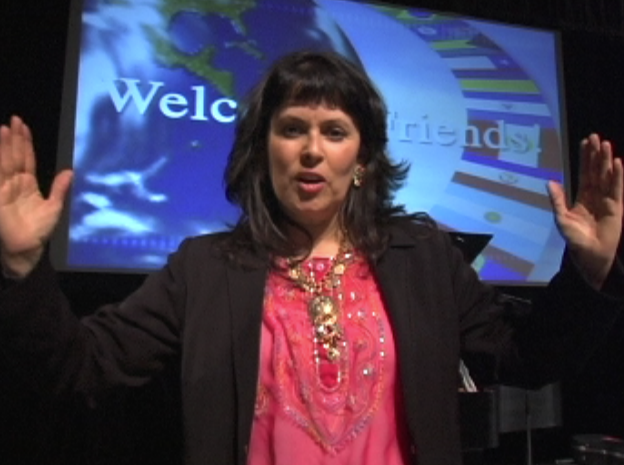 MDR was invited to represent the children of the Americas at the United Nations Global Peace Initiative for Women in Geneva, Switzerland. MDR's work led to being a friendship ambassador as she toured the United States and Europe. 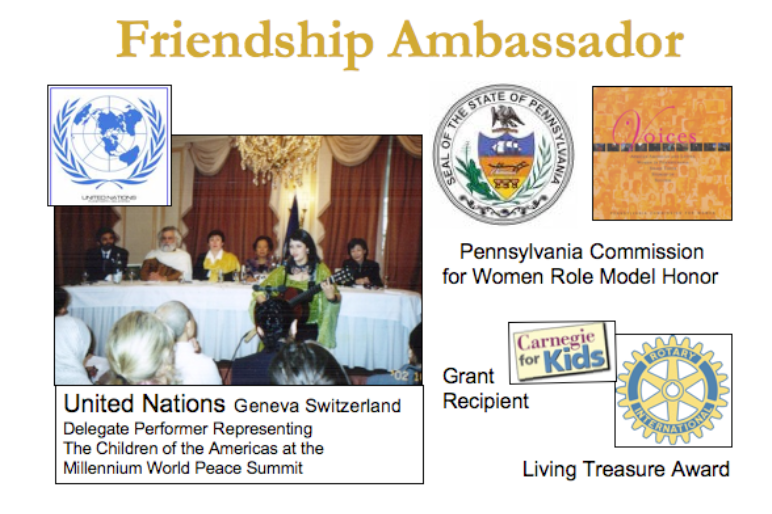 Maria was honored as one of 50 state-role-model women of accomplishment to inspire at-risk girls by The Pennsylvania Commission for Women in partnership with The Smithsonian Institute. This exhibit traveled with the portraits of these women through the state of Pennsylvania to reach at-risk African-American and Hispanic girls to inspire young girls, to see what is possible if they become educated, and self-made women. The role models became successful girls to women despite difficult odds, prejudices, and the challenges they faced. Maria Elizabeth Del Rey's portrait was one of the esteemed company of fifty women with her humble Cuban refugee beginnings. The exhibit started at the John Heinz Smithsonian Museum in Pittsburg 2008, which then moved to the Harrisburg State Museum 2009, and then to its final home in Philadelphia in 2010. 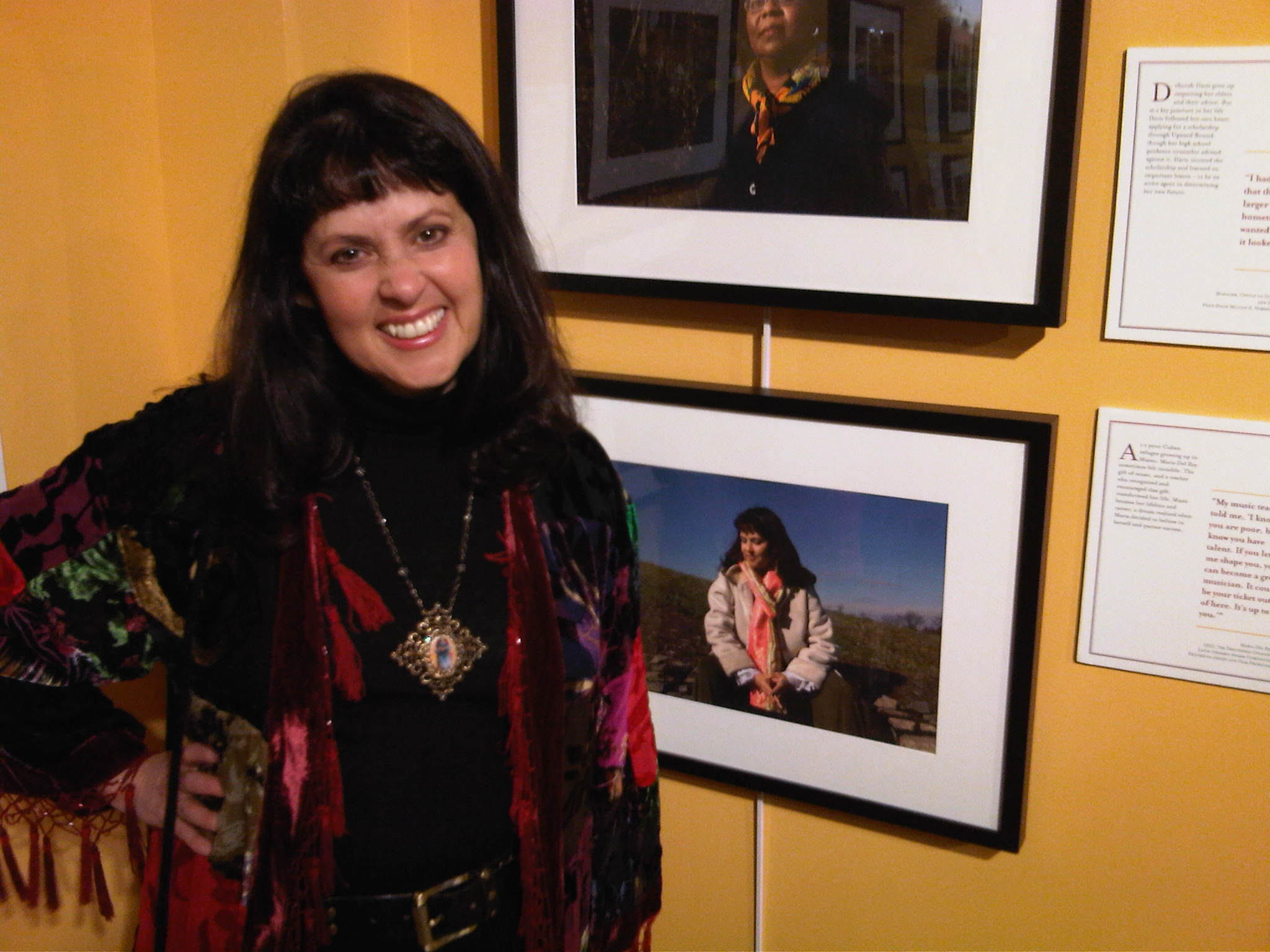 From 2012 to 2016, MDR became the founder and publisher of ChildGood Magazine, The Journal for Creative Families. The magazine grew to reach readers in over 50 countries. The magazine consistently listed in the Top 10 for best family magazines in the world on Apple's 'What's Hot List' for over 170 weeks on Newsstand. Four years was a great run, but when Newsstand closed up their platform combined with the lack of music as an integral part of the art, brought a "happy I did it" experience for MDR. 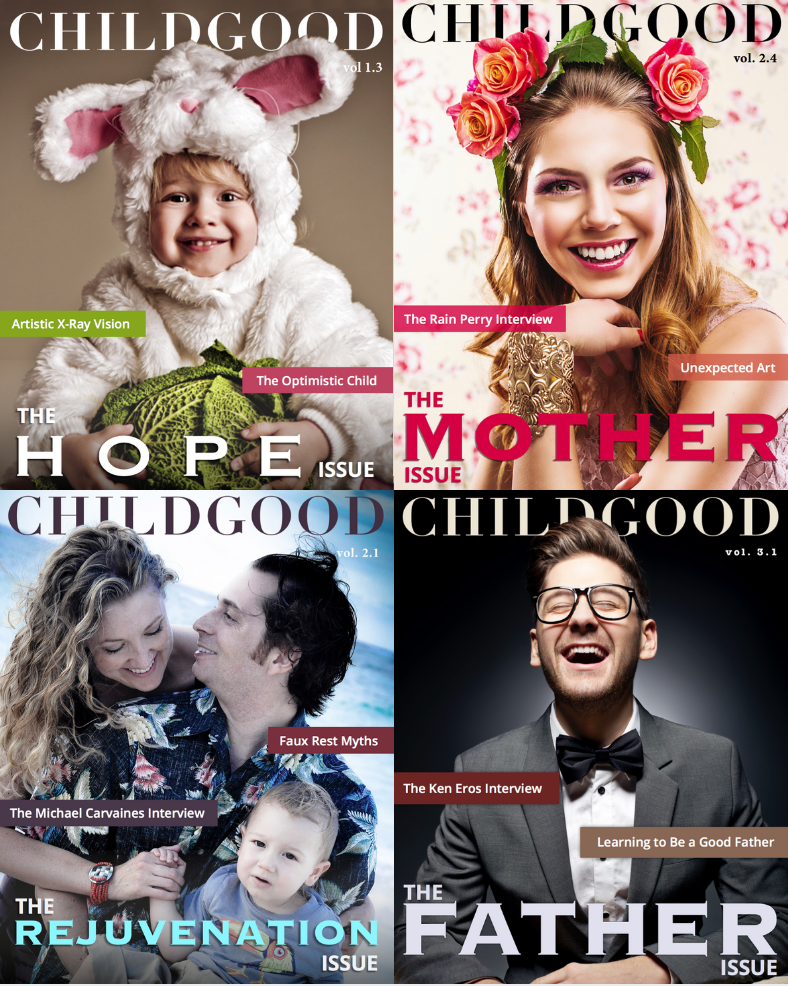 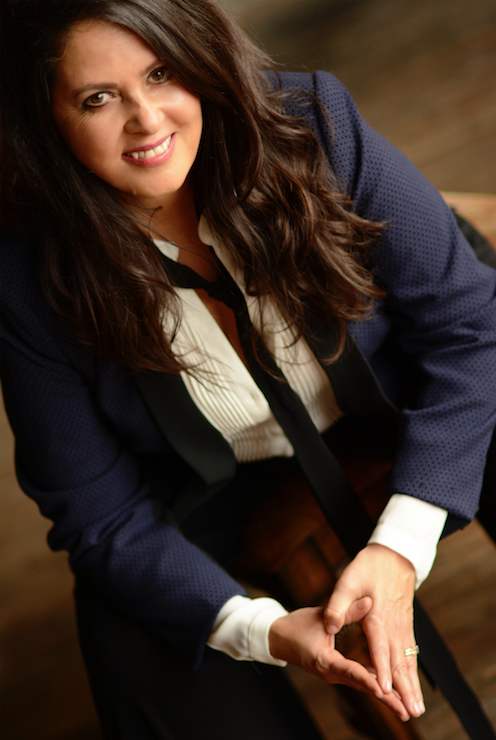 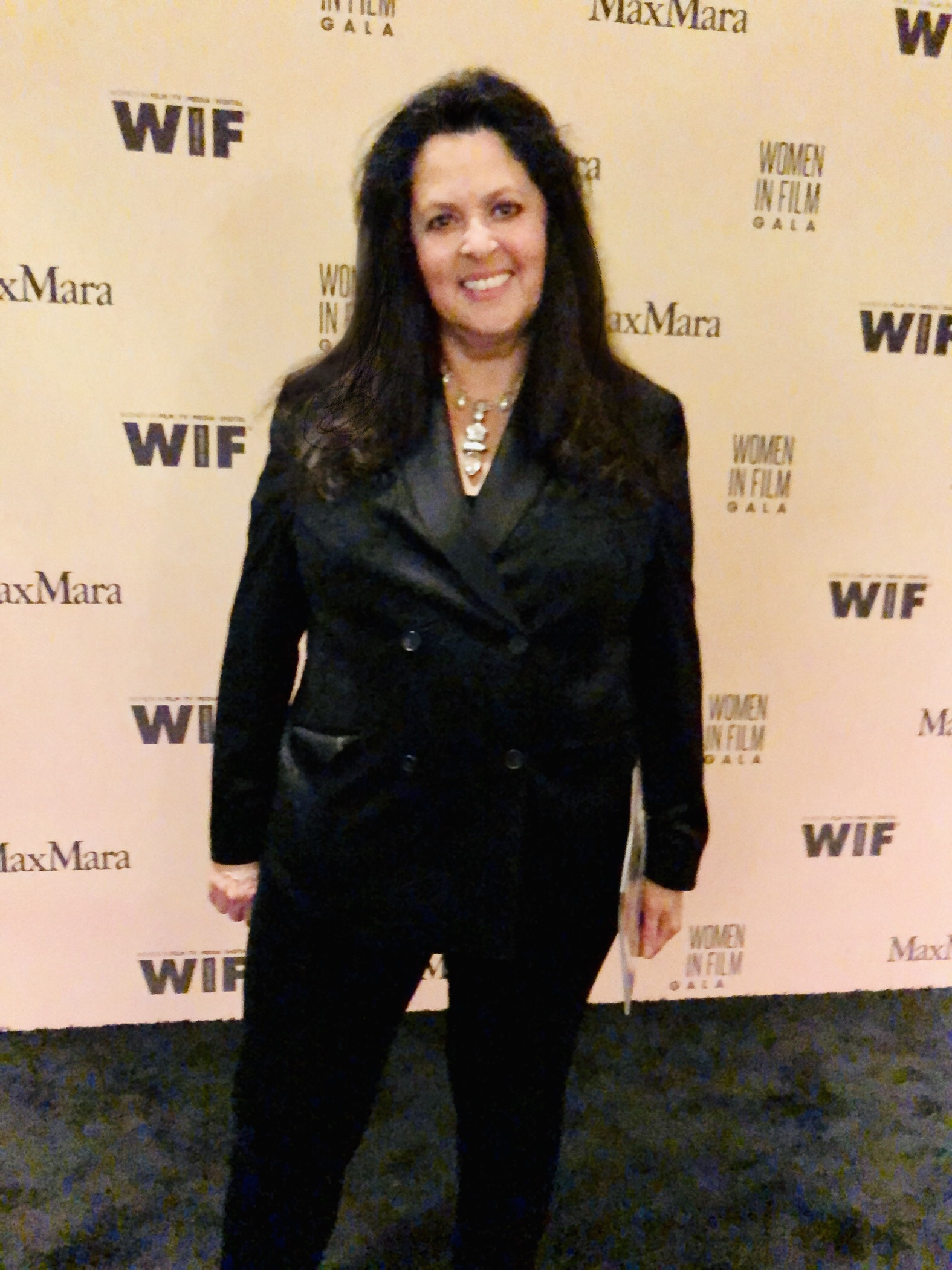 "For those of us that are privileged to know a little more about her (Maria Del Rey), she is also a well-organized producing, writing, and marketing machine. Most important of all, she is a warm ray of sunshine in any room she enters."

"As the executive editor of Living Language, a division of Random House, Inc. which focuses on producing and publishing text and audio materials for language learners. "I've had ample opportunity to work with Maria Del Rey. Maria's professionalism, her ever-present enthusiasm for her work, her sensitivity for our specific needs, and her impeccable style make it a pleasure to do business with her. Maria never hesitates to go the extra mile to please her customers, and therefore I do not doubt that she will succeed in any endeavor she may embark upon."

" Congratulations on your extraordinary achievements. Your presence in this book and your legacy as a role model for young girls will help to assure a future filled with impressive women leaders throughout the commonwealth."

"Maria Del Rey's Universe of Song - In which we find the millennium bringing us kids songs in English and Spanish as the urban dweller gets to give their kids a head start on interacting in the real world.  Expertly presented by Maria Del Rey, Kids like to have fun in any language, and this is a sweet reflection of it."

"Here is a music production that is truly an important work for any collector; Lullabies of Latin America by Maria Del Rey sang in both Spanish and English with 28 titles in total." (Translated from the Spanish article)

"Maria Del Rey's Lullabies of Latin America is a perfect beginning for a whole new generation of bilingual babies."

"Recommended as one of the top three gifts for Mother's Day."

"Music that you and your baby will adore."

"I believe Maria Del Rey has the drive, vision, and products to do very well as an entrepreneur. Her spirited energy and her creativity serve and inspire her and her colleagues. I am glad that I had an early opportunity to invest in her, and I wish her well."

"We are fortunate to have talented, visionaries like Maria Del Rey, creating real magic in the media. She makes such a difference in the lives of our children, our communities, and our world."

"When I evaluate an investment, I begin with the people. Having known Maria for some years before investing, I have repeatedly observed her ability to manifest her goals. She understands all aspects of her projects and repeatedly brings them to fruition. In addition to her integrity, she can create win/wins that are extraordinary."

"Maria is an extraordinary multi-dimensional woman, mother, performer, chief visionary officer, and strategic planner. At one point in her career, I invested in a CD and was delighted to receive a nice return on my investment. Since then, Maria has impressed me with her vision and actions, and I would suggest to anyone considering funding or working with Maria to move ahead. Only good can come from an association with Maria."

"The performances ignited the imaginations of our students and family audiences as they traveled through Latin America with Maria and her beautiful songs, dances, and music as their guide. Our audiences were thrilled with Maria's warmth, energy, interaction, and memorable music."
Jason Holland Education Department Manager
Orange County Performing Arts Center

"That was a most delightful morning. I can tell from your reviews, accolades, awards, and such that you do not lack from pats on the back, but I'm going to give you another one anyway.  You deserve, have earned, each scintilla of praise you receive.  Not only was I impressed with your obvious talent, but also with your knowledge and study of the many interwoven aspects you cover (music, teaching, children, multiple languages and cultures, interpersonal communication) and your ability to not only know communicate eloquently and with ease on such a breadth of topics but to embody them in the whole of your presentation.  You spoke of empowering and nurturing, and this you did for everyone at every age and intellectual level, which was there in attendance.  You are a shining example of all you profess.  It was, in short, delightful.  On behalf of all those in attendance and from all six campuses, my sincerest thanks."

"Maria Del Rey was a joy to have in the state of Nebraska.  She is a professional producer and vibrant personality that brought many different towns and communities together to celebrate through music and stories.  Her time in Nebraska, especially for the children she inspired, will never be forgotten." (15-concert Nebraska state ambassadorial concert and school residency tour)
Laura Kendall - Assistant Director of Community Engagement and Learning
Lied Center for Performing Arts

"The spirit of this work is of the highest quality. I recommend your work as an excellent way to immerse new and advanced students of Spanish in a poetic musical work of great clarity and purity.  Well done!"

"This creative recording is the most beautiful children's music. It is magical, loving, nurturing, comfortable, adoring.  This is what children will thrive upon, a cultural recipe that is better than chicken soup, holiday bread, tamales, or Yorkshire pudding."

"The lullabies in this series are very traditional, and as I listened to them, I was reminded of the times I heard my grandmother singing them to my younger brother.  Needless to say, she probably sang them to me as well.  The lullabies were wonderful to listen to since I had long lost the lyrics, and only the melodies remained."

"Lullabies of Latin America has fast become one of our favorite titles."

"Lullabies of Latin America is a musical gem! The musical arrangement, combined with Maria's melodic voice makes each song unique and special.  The songs conjure colorful images of love, spirituality, freedom, and nature.  Some are whimsical and fun.  Lullabies, whether sung or spoken, will always connect mother, child, and the earth."

"If you're looking for music that will not only soothe your little ones but also calm your nerves, pick up Maria Del Rey's latest.  Del Rey incorporates many vivid yet tranquil images on her album of Latin American poems and lullabies, recorded in Spanish and English. The recitations are as enjoyable as the songs."

"Maria Del Rey has a voice that is both clear and colorful with the beauty and soul of the song."

"My children are listening to your new CD.  One called down to tell us how beautiful Maria is (the music).  Each night when I put her to bed, she still tells me to "turn Maria on." It is so beautiful to be a part of distributing music as vibrant and stunning as yours."

Maria Del Rey was chosen personally by film director Ridley Scott to represent the face of Latin America for a Bank of England project.

In 2002, Hampton - Brown, a publisher of educational materials for bilingual and ESL students, asked Maria Del Rey to contribute to its new Elementary ESL program. What began as an ordinary project became an extraordinary collaboration between a sparkling talent and a demanding industry. Maria's unflagging energy and commitment to the project resulted in a product that exceeded expectations. Her songs and recordings transcend their educational purpose, bringing joy as well as learning into the classroom.  It would be enough that Maria's creative talent soars above the ordinary that it is as infectious as one of her Latin rhythms, but it exceeds even that.  Working with Maria is like opening a surprise package filled with delights. She enriches the imagination and the heart. She is the song she sings. 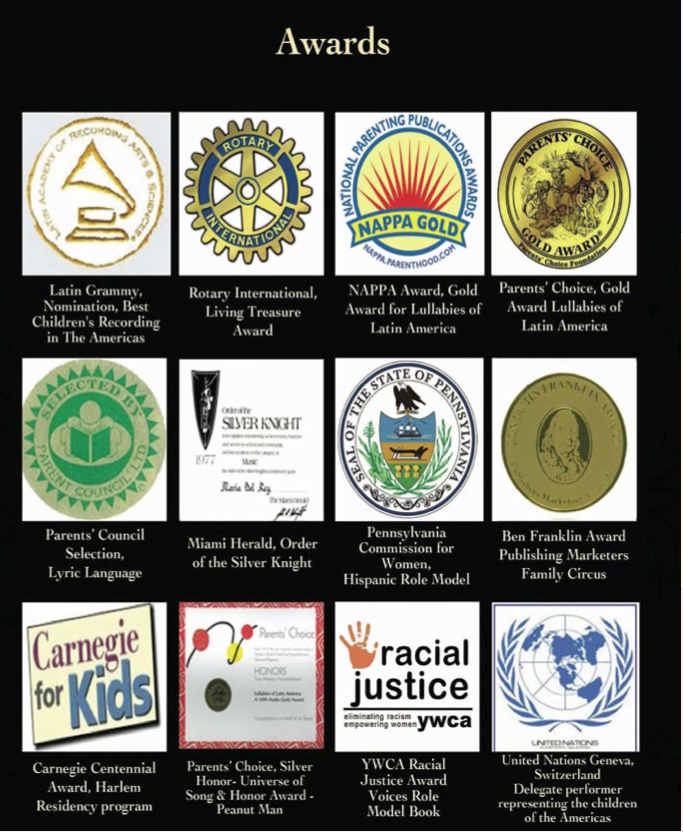 Miami Herald, The Order of the Silver Knight 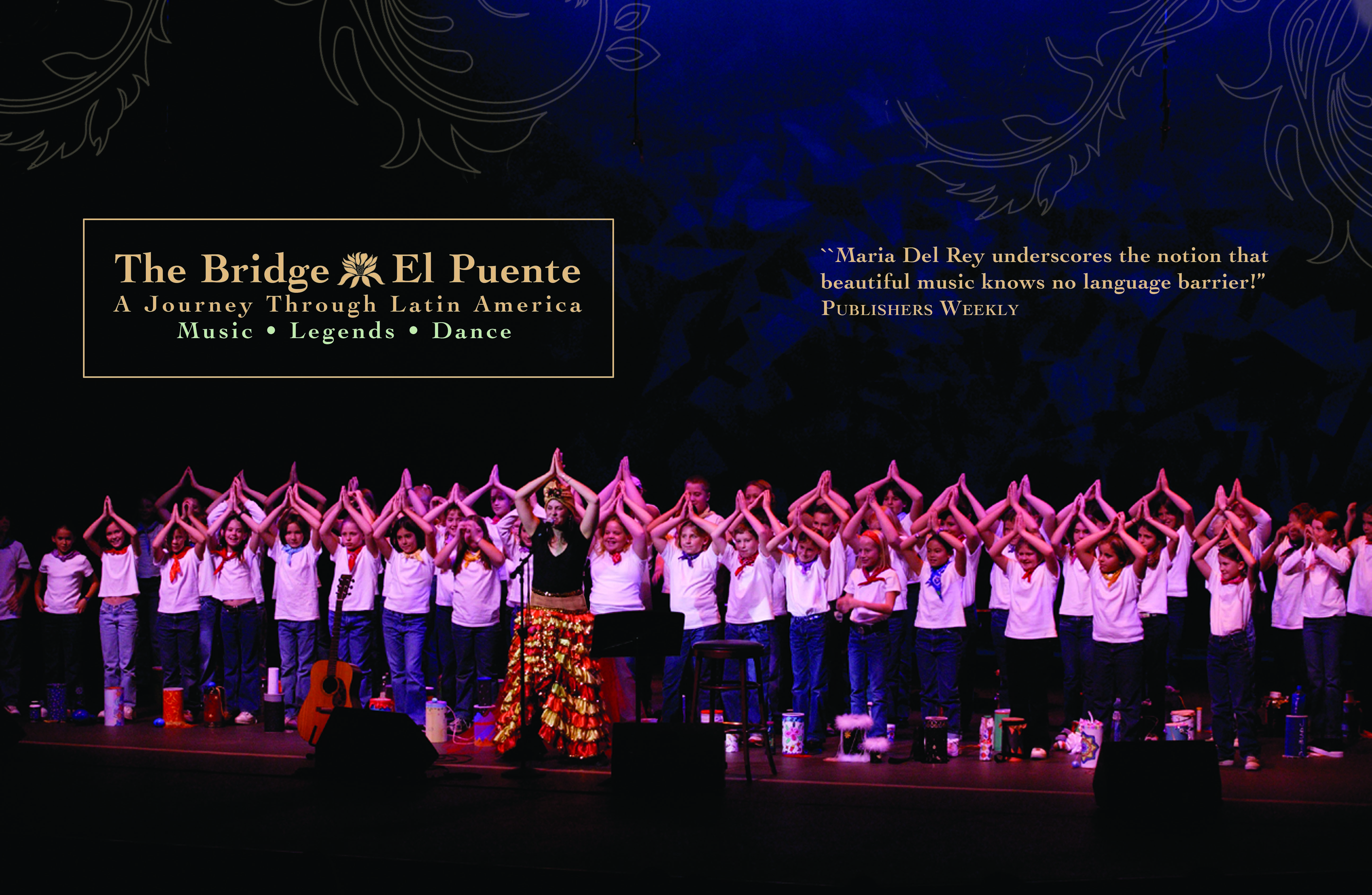